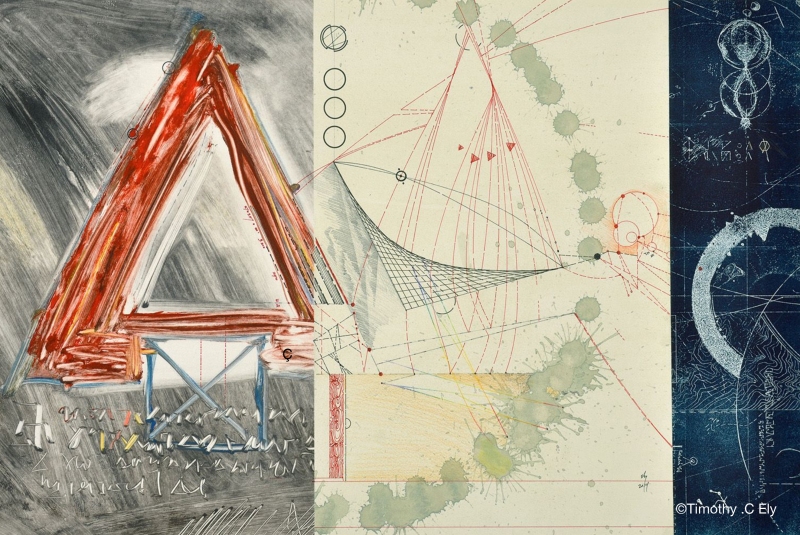 The mere act of seeking often leads to answers in surprising places. I was looking hard after leaving grad school – following the idea of making one-of-a-kind books that contained my images.

I had made a few visual books, in essence small board books with all the wrong machine directions and improper adhesives. What I sensed was that the entire process of book making, its scale and the meshing of all sorts of materials and disciplines was an extraordinary place to be thinking. It was Alchemy of the first order. However, the content of these first efforts felt closer to a comic book/science fiction adventure-land construction than something that would be a seed generator.

I needed to find more than comic books. I needed to find the idea OF AN IDEA that would be self reflective and regenerative. It would have to feed itself and lead to a higher set of dimensional constructs. That was the sense, anyway.

Then, I had a major epiphany in the local library. Picking up a conventional Atlas it dawned on me that this book form offered a visual template leading toward what I wanted to see and make.

It’s impossible to describe the power of the moment when I ‘’discovered the atlas’’. I still celebrate it every October. I can also see the antecedents that lead to this. Hours spent pouring over Martian map-scales in grad school, getting lost in the woods when the map reading went wrong…one continues to stack the blocks until they fall…nicely into place. Maps set up the conditions for convolution and narrative.

After all, a good Atlas is large, contains incredibly complex diagrammatic information and maps. Maps are a proxy for the real world – while they are NOT the real world they help us navigate it and plan our way through it.

Discovering the Atlas was being touched by God or Rand McNally – it is about being awake and fully formed. The experience stands out for me as precisely how I see creativity working – – connections are established, points connected and gelation occurs … after that it is a question of sorting out the making of the thing that carries the vision.

Oh. The Making. It’s in the making that we reach the awkward part. Here you can really embarrass yourself or shine.

With the Atlas in my mind, I sketched out a plan and elevation of the book to be made, started to think more deeply of the kind of information that my maps potentially could deal with and I felt equipped to begin.

The first book I made was called MEGALITH and was grounded in maps of stone circles in England. This choice of topic was, in part, a response to the notion that England also held much of what I needed in terms of learning more deeply about bookbinding as all my purchases were books from the UK. I would have to go to England.

My work began to develop at a good pace. There was much to learn and the first principal I felt needed sorting out was elegance.

We should consider this point well:  that this is the crux of how vision and craft intertwine. Having found the atlas form, I was finally in possession of a very solid idea — a way to tease out of the drawing instruments a set of sequences that could make for a fine book. But missing (or not yet fused) in this concept was a clear direction toward making the elegant container (the book) which would make my vision real.

At this point, mid 70’s, my structures lacked refinement. Seeing old period bindings helped but much was hidden. There was a limit to what the bookbinding texts could project on their own.

In any event, I took risks; I bought real bookbinding leather and knives and carved that skin into fragments. A set of handle letters were purchased and I tooled on anything not moving. I learned to make gorgeous paste from all sorts of plant starches and started to build equipment. Junk shops were combed and slowly I found old Victorian machines and tools. Many tools were inherited from my Grandfather which were serviceable for bookbinding as well. The trajectory seemed totally viable.

I could see the art I wanted to make floating in front of my eyes. It was revery of the first order.

Culture was also taking certain crafts like painting off into a ‘’head driven direction’’ (emphasizing theory and concepts as opposed to creating physical artifacts like paintings). This direction in art was unappetizing.

I am part pre-Gutenberg, part Victorian and part Martian. I was a stoker on the Nautilus. I swept up after William Morris. I adapted the imagery of Tom Swift and Buck Rogers. ‘’Ice was on my wings- there was no turning back’’. All ahead full.

I spent a few years in a delirious, self imposed apprenticeship, supported by lots of part time work; some fundamental book repairs, various artist residencies and lots of guitar lessons given.

Yet I was still searching for the elegant container.

Continued in:  My Artists Journey. Part 3:  Skills and Quality