While in England on my NEA grant, I met Philip Smith – an encounter that spun into a lifelong friendship.

Most bookbinding texts focus on journeyman work – the skills needed to begin the process and to contemplate mends, repairs and the conservation of rare works. During my self-propelled apprenticeship I found many books covering these issues in binding – key issues where I was intrigued.

Through them I learned a tremendous amount about the raw fundamentals and first principals. Measure twice cut once. Naturally, the arc of auto-didacticism will miss the subtle stuff and I could usually tell when a process went south but I could not always determine the reason.

Yet these books ironically offered no vision leading toward manifesting expressive moves in bookbinding. The catalogs of bindings were dull.

The most modernist work exhibited in the field were bookbindings that seemed to me visually akin to high school year books. That sounds brutal, right? The trend I saw was leather and gold on a base covering of leather and an arrangement of swooping triangle forms which were awkward. It was usually finished with a bit of gold tooling so one could say it was tooled.

I would later discover that very few bookbinders ever experienced a design or drawing class. Thus most books followed a few canons of trending-looks. Some of these looks were driven by the tools easily at hand. Sometimes there was an effort to link the design with the content of the book but these often became awkward attempts at illustrating a key point. I was underwhelmed by the efforts my research revealed.

Still, I sensed in the book form the potential for an astounding platform for the dance of imagery which was underutilized.

When I discovered Philip Smith’s writing I was on new ground. 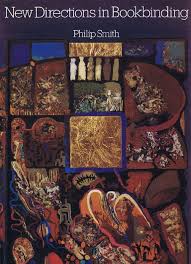 I was at the University of Washington bookstore purchasing Cockerell’s book, BOOKBINDING AND THE CARE OF BOOKS and two other small books about binding that I’d found. Cockerell’s book is wonderful, written in English and is the ground plane of my technical imagination. I now own at least five copies and a couple of first editions . I can hear his voice. But it still brought nothing about the radiance of an art experience.

Browsing around, something caught my eye. Off to my right in the textile section, mis-shelved, a large format book was sticking out into the aisle. The title on the spine was NEW DIRECTIONS IN BOOKBINDING… by Philip Smith.

It was expensive and I had already exceeded my self-imposed allowance for the day with a big pile. So I returned home but knew I had seriously erred. Panicked, I returned the next day to Seattle to buy it.

This book became my “manual of operations”. I read the book every spring and have for some forty years now. Philip thinks this is very funny but I swear I find new words and overlooked notions with each reading. This book is so heavy in invention, technique, and gorgeous ideas that it exerted a tremendous influence on my making mind.

Here was a book on expression and technical experiments and some really marvelous weird stuff. There were words I did not know [Maril, feathered onlays] but these were easily sussed out by careful extrapolation and there was a glossary.

Most interesting though, the techniques he covers include aligning science and visual art. Science and Art are related but rarely taught as such. In bookbinding, they are especially close because of the vast inventory and combination of materials required for a book to operate, live a long life, and carry ideas with power. Philip considered the chemistry of materials important to bookbinding. This was a good fit with my fascination with the subject.

From the outset, here was an artist that took extraordinary care with his work and all aspects of this work were deeply felt and considered. His drawings and diagrams were elegant as well as descriptive. There seemed to be perceptible gaps which made no sense but later on I would learn that some 80 pages had been edited out as the book became [according to the publishers] too cumbersome. I have hopes of seeing those pages one day.

Philip’s own work (altering printed literature) and its finished quality are beautiful and extraordinary.

While he worked with many notable books, he is widely known for his bindings on THE LORD OF THE RINGS. Philip is a reader of speculative science fiction and was an avid Tolkien fan. He knew the professor and had a dense correspondence with him. Philip’s imagery tends toward a baroque and figurative mosaic style and a highly personal set of marks that are very finely tuned. With this series, he devised The Book Wall, a device for projecting a large image over the format of some 21 copies of the three-volume set. It’s a staggering undertaking.

The book also introduced me to a new range of binders that he knew. Philip is a good writer and was trained in binding by Roger Powell and Sydney Cockerell. (Powell rebound the Book of Kells in the 1953.) And he is connected to many of the most interesting binders of the 20th century. Because of this book I would meet Roger Powell and Edgar Mansfield and many others. I would also find one of my teachers, David Sellars, thanks to Philip.

Perhaps most critically, in his book Philip wrote about technique – a topic missing from too much art education.

Consider what I encountered in art school. Around 1968, while studying painting in college, a sales rep from Grumbacher Art Materials came to the college on tour. He spent an hour or more presenting and demonstrating a large array of things you could do with paint. He was flogging the new properties of acrylic paints and this demonstration was simply a gathering of methods. Method is important, though. One technical method notion can dilate out and connect with, or enable, many conceptual ideas.

I know that my painting professor knew of these techniques. What I do not know is why technical information is so often withheld within art schools when these methods help us manifest ideas into form. I find this odder still, given that engineering school, mathematics, music, and many other disciplines cram student minds with the means to achieve technical excellence.

The number 21 is useful to me for a number of reasons- – triangulation, its sequence in the Fibonacci series and so on. Philip is 21 years older than I. He was never really a teacher or a mentor but an artist tracking a different path that shared striking similarities to my own. He has been a generous friend and we continue to correspond.

The discovery of Philip’s book led to an advancement of my skills and thinking about the craft. This continues! Processes that were rough, taken for granted or misunderstood were given a new consideration. One of the first things he ever said to me was that “I should make my boards as thin as possible.” (You can read more about Philip Smith here.)

Books are not “merely” books. Humans created books as a repository in which to contain some oral traditions – I find books to be a mix or swirl of words and images that can carry to the future both the mundane and the exalted. It’s a very cool thing.

Paintings have a role in culture and an ease of use, but I sense that books have a larger one. For one thing, they have been around longer and are much more numerous. Some will challenge this bias which is good – culture needs many bumps and things.

Yet the incredible nature of books, the numerous properties, effects and transformational capacity and longevity make this artifact an extension of mind and a device of great power.

In my adventures with Philip here in America and in England and Scandinavia, I was able to understand something of his profound understanding of the contemporary book. Always it opened my eyes. There are stories… I am recalling our walk up the spiral ascent path to the top of Glastonbury Tor… I will save this for another time.

In all, one can only stand in gratitude for people like Philip Smith.

My giant cat Nemo passed this morning. We are crushed
A small thing for today. A detail from a 1990 work…